While the format for this blog has its own default rigidity, in my exploration of this medium I have allowed for a variety of approaches to emerge, such as the travelogue, the gallery review, and the interview. The latter, in particular, has mainly, to this point, focused on artists. The subject for this month's e-terview is not an artist, but fittingly enough her interests and research speak of a similar approach to mine in this venture: wandering and wondering. Dr. Kathryn Kramer is an Associate Professor of Modern and Contemporary Art History at State University of New York Cortland. In addition to having received awards for research and teaching, her writings have been published and presented in a variety of venues. In early 2008, on a chance encounter, Kramer came upon a flier I randomly placed at a conference table, with a call for submissions for an exhibition I was currating on contemporary flânerie. This led to a series of email exchanges that culminated in an essay written by her for the exhibition's catalogue, my presentation at her department's visiting artist series, and the spark for many interesting conversations and potential collaborative and/or corroborative situations between us. Below is the first steps down one road.

How did you become interested in the Flâneur as the subject for your research?

When I was in graduate school, I did some work on Manet’s Parisian street philosophers/ragpickers and in the process read Walter Benjamin’s Charles Baudelaire: A Lyric Poet in the Era of High Capitalism. That book was my entrée into flânerie beyond what everyone, including I, seems to just know about the practice “by osmosis,” so to speak. At that point, I made a mental note that I myself was a natural born flâneuse and moved on to my dissertation on Paul Klee. It was only about five years ago or so that I began to wonder if globalizing cities, particularly beyond the west, could function as new proving grounds for a flânerie revival: was flânerie Eurocentric, or could it go transnational, and if so, how? I chaired a panel on the subject of flânerie and globalization for the 2005 College Art Association conference in Atlanta, which addressed for me the question of flanerie’s contemporary relevance but still left a lot to be pondered regarding its viable internationalization. My current research took off from there.

2- You guest edited the most recent issue of the online journal Wagadu: Journal of Transnational Women's and Gender Studies. This special issue, “Today’s Global Flâneuse,” focuses on the flâneuse. How did that come about and more specifically, what have you included?

Check it out at http://appweb.cortland.edu/ojs/index.php/Wagadu/issue/current. It is inevitable to inquire whether or not the flâneuse has truly arrived on today’s world stage when beginning to reconsider flânerie’s current resonance. While scholarship has long moved away from flânerie's classical definition featuring a bourgeois, indolent male wandering around 19th-century industrializing Paris for the sake of modernity and art, it is still more inclined to insert the flâneuse into 19th-century Paris than to focus on the contemporary flâneuse, although there is a body of recent scholarship, mostly from the last two years or so and mostly coming out of France and Spain, that is finally focusing on the present. This tendency to get stuck in the past seems to be an occupational hazard when trying to tackle flanerie’s currency: Benjamin himself started it by basically re-living Baudelaire’s experience.

This casting for flânerie amidst the high modernism of the 19th century and then taking up semi-permanent residence there is a strange phenomenon and could be a research project in itself, but I wanted to focus on the possibilities of today’s flâneuse with my Wagadu guest editorship. To that end, I put out the call for what I have come to recognize as 21st century flânerie, which is a twining of sociology and aesthetics—ethnographic research practice that is art and vice versa—from feminine perspectives. I was expecting submissions of complex, experiential, and emotive documentations of the dynamics of today’s world cities, providing not only vivid evidence of cities in transformation but also representations of their urban imaginaries. Interestingly, the majority of the submissions reflected more of the interurban circuit created by 21st-century globalization rather than the world cities themselves, leading me to an unexpected conclusion that today’s flâneuse exists more as a global nomad, practicing a broader, more cosmopolitan form of flânerie than the strictly urban variety. Does that mean that cities are still relatively unavailable to the flâneuse, same as it ever was? Perhaps. I think I need a much broader sampling than what appears in Wagadu. So the research on the global flâneuse continues.

What I really like about this issue is that it is a hybrid volume—part ethnography, part memoirs, part artist’s illustrated book. Plus since it is an online journal, we were able to include time-based digital media in its HTML version: the importance of capturing the intrinsic mobility of flânerie with appropriate media cannot be overstated!

3- Your current research focuses on global art events. Could you describe what you have been working on and where this research has taken you? Does this relate to the flânerie in any way?

From 2007-2010, SUNY Cortland supported my research into the interurban circuit of burgeoning biennials and other art expos. My primary purpose was to travel to a variety of these art events over this period in order to explore their connection to the revival of cosmopolitanism, a notion that has experienced resuscitation in the 21st century very much along the lines of flânerie. In the course of my research, I also gathered examples of artists from all over the world who are engaged in the practice of flânerie.

4- What do you plan on doing with this current research? (book, journal, presentations, conference, exhibition, etc) 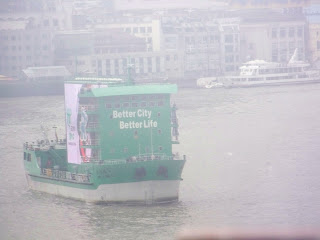 A couple of essays are in various stages of completion. As soon as I visit the 2010 Shanghai World Expo, I am going to complete an essay focusing on Shanghai’s reinvention of itself as a global city in part through its recent biennials and especially through its upcoming world’s fair. I would like to expand the Wagadu edition into an edited book about the feminine filtration of the urban (I am always on the lookout for those who would like to contribute). In terms of the flâneur/flâneuse artists that I am collecting, I would like to—in a Benjaminian gesture—channel Baudelaire and write a description of their practices (so, they would be both Mr. and Ms. “G’s”!!) a la “The Painter of Modern Life” essay. See, it has happened to me, too: the eternal return to the 19th century!
Posted by Unknown at 6:55 AM