state of the arts

in a recent New York Times article I read through Facebook (thanks to Gilda Snowden), a group of artists took residency in Governor's Island and worked for 4 months, culminating in a public day of events that will be open to the public at large until October. this project is sponsored by the Lower Manhattan Cultural Council. Snowden's post sparked some lively debate over state-sponsored ventures.

a space full of (empty) potential in Detroit, among so many others in this city, is the Russell Industrial Center, which already houses many artist studios, workshops, commercial ventures, a bazaar, and alternative spaces/galleries. this complex is truly amazing in its scale, and only a small portion of it seems to be permanently utilized. I added my two cents to the discussion saying that Detroit should promote an art residency program at the Russell, where four artists with a 6 months residency and a $15,000 stipend each could run for less than $100,000 a year (excluding renovation and administrative salaries)... my idea was met with some sarcasm, in part because there is truly no money anywhere in the city or state for the arts. many wonderful and established programs are struggling right now to keep their head above the water as is, so why spread what little is left with another venture?. I completely sympathize with this sentiment.

my thought was that such residency could place Detroit and surrounding communities in a better and continuing dialogue with the global art world/market (specially if it was run similar to or modeled after the Art Pace in San Antonio, with one local/regional, one national, and one international artist selected each year). I also posited that the Kresge Foundation could add that to their already extremely generous portfolio of programs for the arts in Michigan ( the same could be said about the Art Prize folks - this being the million dollar yearly project, soon to unveil year two in Grand Rapids, MI - they could jump in as well). there are many other wealthy and generous families in the metro area and state as well, who already contribute to many causes, art or otherwise. I am more than happy to get no credit should this idea ever come into fruition (as we would all benefit from it, one way or another), and would gladly provide the little know-how I have on the subject. 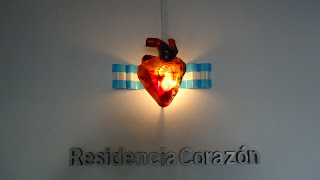 of course this thought has been sparked by my current situation, that of being an artist in residency at Casa de Artistas - Residencia Corazon, in La Plata, Buenos Aires, Argentina (this being my third experience in a AIR program). the specifics of my experiences can be read on my daily Notes posted on Facebook (friend me if you have not already). this residency program is institutionally supported by the Secretaria de Cultura y Educacion - Municipalidad de La Plata, Instituto Cultural Buenos Aires, and Universidad Nacional de La Plata, among other private organizations. artists participating also contribute with a nominal fee. currently, all residencies are either one or two months long.

Rodrigo Mirto and Juan Pablo Ferrer are the directors for this residency program. both have other professional activities on the side, Mirto is an artist that works in sculpture and painting, as well as a custom maker of iron rod fixtures for private homes. Ferrer does some photography and video on his own time, in addition to co-directing La Plata's International Independent Film Festival and running the year-round programing for the Cine at the Centro Cultural Pasaje Dardo Rocha. a few days ago we were talking about the economic situation in the U.S. and I explained how things have changed, though now it is either getting better, people are getting used to it, or the media found a sexier subject to cover. in so many words (still some language barrier in our communications) they told me that what we see as our current struggle is something they have always had to deal with, that being an artist or in a creative field in Argentina has always meant you have to do something else, on the side(s). 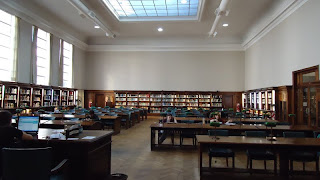 a few days later, while touring the city, we went to the (state run) Fine Arts College and walked around. the building, which also housed a secondary school, a library and the university radio channels, was somewhat falling apart (though the library was beautifully renovated, albeit a bit hot), but the high energy was palpable, with bright-eyed students talking and practicing their art, singing, playing instruments, sketching, everywhere (combine "fame" with "buena vista social club" to get a sense). the college radio station was on the top floor, so we went for a visit and met Oscar Jalil, among others, the coordinator for 107.5 FM, who also curates the exhibitions at the (city sponsored) Malvinas Centro Cultural and writes for the Argentine Rolling Stones. the usual mate drinking and indoor smoking took place, along fast conversation and with David Bowie playing in the background). a day later I went to the Malvinas complex for a double opening reception, but that is subject for another blog entry.

one expectation and anxiety on going into a residency program is the shut out factor of not having television available. this of course is not usually a problem if there is an internet connection available, if you are still in the U.S. (or whatever country you are from) and access to local programing. but when you are abroad most American television is off limits. that, compounded with the lack of telephonic communication at an affordable rate, gives you a lot of thinking time (and many hours wasted looking at cats on youtube). Ferrer gave me to watch a DVD by Hernan Khourian, a local artist who works with video. of special interest to me was a video titled Esplin o errar o sin embargo (18 minutes, color, 2007) that he created while doing an artist residency in Paris. this piece had some of the reflexive energy, wonderment and mesmerizing visuality of early Bill Viola pieces, such as sweet light (1977) and I do not know what it is I am like (1986), but with a more youthful, contemporary edge/references. his residency required that the work reflected his experiences in Paris, so he combined images of the Eiffel Tower as seen from a window of his living quarters (a space that almost felt like a prison or hospital), with webcam images of the same tower from the internet. the program he participated in was sponsored by the Ville de Paris, el Ministerio de Cultura de la Ciudad Autonoma de Buenos Aires, and the French Embassy in Argentina. Khorian, who now teaches at the university level in La Plata and Lanús, has also earned many artist prizes that are state funded.

while federal and regional government funding for the arts is common throughout Latin America and Europe (though at times limited and also shrinking - they have their struggles, but they keep going and going strong), and I imagine in other parts of the world, in the U.S. it varies from state to state. Since the 80's NEA backlash many Arts Councils have struggle to keep what they have going. the current economic climate does not help either. Michigan began a tax incentive for film-making, and the region has seen some of the benefits already (though it is not a gold mine). but why not extend such benefits to other art forms? why not reserve a portion of State tax to the arts? Michigan has a population of about 10 million people, almost 3.8 million households in 2000 (per http://quickfacts.census.gov/qfd/states/26000.html). if less than $1, even a quarter or a dime, from each Michigan household's collected income was geared toward the visual arts (you may say I am a dreamer), the state could position itself as a competitive and creative environment that embraces intellectual pursuits as a right to its people, and the ones that choose to move there. instead Michigan has had a continued population bleed, or brain drain, for many years now (per http://detnews.com/article/20090402/METRO/904020403/Leaving-Michigan-Behind--Eight-year-population-exodus-staggers-state). and this state is not alone in that, as the American mindset promotes, rightly so, the seeking of opportunities where opportunities are. ironically, countries with less economic power seem to have greater support for the arts. we might want to learn from them or we will be left behind, on the side.