As 2010 comes to a close, many things surprise me. One is the fact that blogs exist and that I actually have one (or two), even though I do not write as often as I would like. Another is the fact that photography still has such a cultural and controversial presence in today's world. This last statement is problematic in many ways, I know. Some would argue that today, more than ever and unlike any other time, photography is simply unescapable.

Let me try to clarify a couple things here. For the purposes of this blog entry (and only this one) I will expand the meaning of the term and/or the technology, by defining photography as anything using a mechano-electro-digital device to produce images via refraction. I will further limit it to the acquiring or capturing of such images without the element of time and sequentiality added (meaning I will exclude video and cinema here), or the conjunction with other media (such as print and hyper media). My regained wonderment comes from the fact that photographic images are still loaded with the burden of truth or proof at the closing of the first decade of this new milenium. In the age when photoshop became a verb, I positively assumed this medium had lost that punch.

A couple recent news events brought those issues back to the public discourse, and though they seem disconnected, they somehow provide me with two sides of a(n American) coin, even though they seem to be doing the exact same thing. As the busiest traveling weekend in U.S. unfolds, much discussion on the merits and concerns over the scan machines at the TSA check points are and have taken place. Radiation and patting aside, many fear the exposure/capture of their naked bodies and the potential distribution/disclosure of said images (this in the age of Facebook and Twitter image uploads by the million, or better yet, "With this economy, what about the children?"). This fear connotes the (supposed) proof and truth of photography as privacy and modesty transgressions. Whether or not such leaks will happen remains to be seen (the ones that have shown up thus far are not clear, as far as image rendering, nor flattering and enticing in a mainstream pop sense). As fewer than 20% of all passenger will have to make a choice between a latex and a radiating space, I am not sure I will ever be put into that position, at least not in 2010, with only two flights left. This age-new discussion (to scan or not to scan, that is the question), works almost as a decoy to the underlying issue at hand, gloved or otherwise - more on this later.

Meanwhile, in New York City, an Assistant Professor of Photography at NYU has surgically embedded a cam on the back of his head, as art. Each and every minute this eye-spy third-I device captures an image and sends it via the interwebs to the other side of the planet, to the new Mathab: Arab Museum of Modern Art in Qatar as art, and to be displayed as art. A question, somewhat close to home for me although ancillary to most, is to what lengths must one go to ride the train on the tenure track ( or "to peer-review or not to peer-review..."). The current concern is also on the privacy issues surrounding this project. Will Prof. Wafaa Bilal have to wear a sign letting people know that they are under surveillance (will he also need to only play elevator music on his iPod)? Already discussed and decided by his department will be the use of a lens cap while on campus (paging academic freedom), to protect its students' privacy (their disclaimer)or pontentially shield any future lawsuits of varied natures (my suspicion).

A solution to the scanning problem in airports, provided by some folks in the conservative crowd, is the return of profiling, meaning that only Muslims/Arabs or anyone that does not look like me (not my "me", their "me") should have their bodies thoroughly searched, with either the digits of a hand, or digital imaging. While I do not provide a direct quote here, anyone can read tons of opinions openly expressed that mirror what I have conveyed, in many news media sites. I wonder what Prof. Bilal, who was born in Iraq, went/would have/has got/will have to go through at a TSA gate check. Will he have to bring a note from his doctor or his boss (a different type of doctor)?

The underlying issue for me is that we have gotten to the point where our sense of freedom and self have been captured, so swiftly, in the name of an image, and images. These images are as much of "them" as of "us" and they all seemed to be detached from much first hand experience(s). This sentiment, this paranoia, and unapologetic stereotyping has crossed over so many spheres of public interest, such as politics, mass media, and academia. What are we protecting ourselves from, if not from ourselves? What have we got to fear, but fear itself? (paging overused cliches).

Definitions for "obscena" I found online (search as research?) follow: inauspicious/unpropitious; ill-omened/boding ill; filthy| polluted| disgusting; obscene, vulgar; improper, indecent (especially of sexual indecency); profane; immodest, impure; dirty, filthy; indecent, obscene; scabrous, ribald; unclean. I find these words potentially more fitting to images we have not extensively seen much in the last 10 years, of illegal searches, the handling and destruction of bodies, of forgone privacy and pursue of clean water/shelter/life (let alone happiness), of the fracturing and fragmentation of families, towns, cultures, of unsung heroes, of misled youth with the promise of something that never existed, of debt and loss and loss of debt, of name calling and not being called out, most of which (but not all) have taken place elsewhere, in someone else's backyard, far away, on the other side of the planet.

Obscenity can be understood as that one caveat that pinches freedom of expression. But that may be a mute point at this point. Laws regarding obscenity (words, images, actions) in the land of the free (which exclude commercial pornography) have mostly to do with the immediate/local context of what offends a particular community - that is, they are the ones who decide. But at times we seem to expand this approach beyond our own realm, beyond the schoolyard.

A couple years ago, at the 2008 FILE exhibition in Sao Paulo, I came across a fascinating, even if very simple, piece of art. Amongst the many interactive pieces of art displayed in the darkened room was a large reflective surface which displayed both multiple human images and a vertically moving bar of light, left to right. I then noticed many children surrounding this piece (I was one of the oldest person there, visitors and staff alike); they ran and slammed their bodies onto the glass, like bugs in the windshield of a car, or players in a testosterone-drive sport bumping chests. Their images were simultaneously captured and displayed on that surface, which I then understood it to be a life-size scanner. In retrospect I found their fascination with their reproduced bodies refreshing, almost beautiful. Their proximity (imagine 5 or 6 tweens pressing themselves onto a 6 foot width of plexi) was not sexual nor self conscious, their sense of self seemed somewhat collective, sans hierarchy, sans distinctions, sans prejudice. They all smiled to the camera and celebrated their bodies, their images, their choice, their freedom. 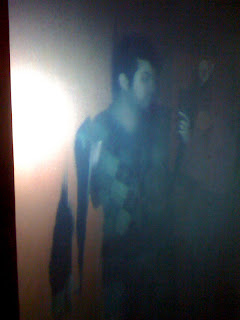 PS: While writing this I also thought about ways to include some info on  x-ray research on lobster vision (they possess one of the most "unique vision system in the animal kingdom") that was funded by the department of homeland security , but decided to exclude because they are considering reflection instead of refraction... it is an interesting subject to say the least... file under "fun fact" or check out the link below:
http://science.howstuffworks.com/lobster-x-ray-technology.htm/printable
Posted by Unknown at 11:54 AM