My time in Brazil at the end of the year 2010 has been extremely inspiring in a variety of ways. The works of art I have seen have inspired me to write a series of posts, which I will begin now and probably end in early 2011. To start, I thought it would be interesting to showcase a variety of works I do not plan on addressing in future posts. In many ways this will probably be the most visual (and least textual, as far as language is concerned) post from this blog's series. Take this as a visual collection of what I saw on the last week of the "Bienal." 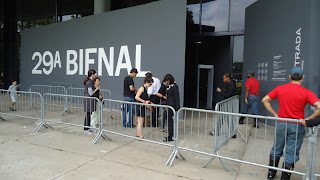 The 29th São Paulo Biennial, the second oldest of its kind in the world (followed by the Venice Biennale), took place at the Parque do Ibirapuera's Ciccillo Matarazzo Pavillion from September 25 till December 12, 2010. Curated by Agnaldo Farias, Moacir dos Anjos, with guest curators Chus Martinez, Ferndando Alvim, Rina Carvajal, Sarat Maharaj, and Yuko Hasegawa and financially supported by many corporations (national, international, multi-national, the list is immense) , this edition's title was Á SEMPRE UM COPO DE MAR PARA UM HOMEM NAVEGAR, which translates as "there is always a cup of sea to sail in," a quotation from the poem Orpheus' Invention by Jorge de Lima [its title bespeaks of Orpheus being invented, rather than him inventing something]. The logo-image for the Biennial is depicted below (a cup with a wine cork pierced by a needle, floating in water, of varied colors. 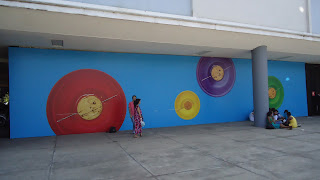 It is always fun to run into "old friends" in events such as these. In fact, some of my favorite artists were represented here.  159 artists from all over the world participated in this edition, which was divided into six different thematic areas: FAR AWAY, RIGHT HERE; I AM THE STREET; REMEMBRANCE AND OBLIVION; SAID, UNSAID, NOT TO BE SAID; THE OTHER, THE SAME; and THE SKIN OF THE INVISIBLE.
I will begin with three artists that I actually know (as in have met, hug, had a meal, a drink, a conversation, etc).
At first I could not find where her work was, but upon reading the catalogue and actually consulting the map I realized that Adrian Piper (USA, 1948)'s work, titled Bach Whistled, was actually an audio piece installed in the stairway between the second and third floors. Much like the artist herself, this piece possesses a beautiful softness/lightness, laced with whimsy, while simultaneously critical of socio-ethno-cultural and in this case even architectural structures. Below is a short clip of it (my camera battery died while I was taping). This work was a lovely encounter amidst the cacophany of sounds all over. I imagine it would have also been a great juxtaposition to the vultures piece title Bandeira Branca (White Flag, based on an old samba song but perhaps a reference to violence and piece) by Nuno Ramos (Brazil, 1960), before the birds were take away (future blog post).


If I had one task when going to the Biennial, it was to find and document the works of Karina Skvirsky Aguilera (USA, 1967), whom I have known since 2006 while curating the TERGLOBA exhibition. My Pictures from Ecuador, as presented here, consisted of 12 photographic prints of old album pages from a family trip abroad in the 70s. Like most photography these days (and perhaps always), Karina's work meddles that tension of the real and the imaginary that sits in the tenuous line of (digital) manipulation, believability, and compression, while addressing concerns of history, identity, and memory - also fluid. Unfortunately my documentation was not as good as it could have been, a recurring theme in  a building with extremely high ceilings and tons of windows. 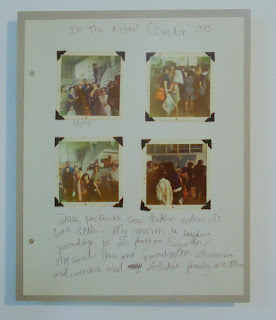 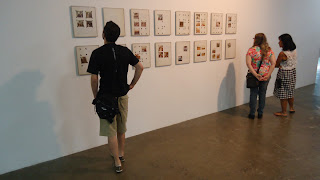 Last but not least, I sort of ran into Nan Goldin (USA, 1953) 's The Ballad of Sexual Dependency almost by mistake, as I thought she had something else in the show. I first saw this piece when I met Nan, back in the mid/late 90s, when she performed it live in São Paulo at a cultural center nearby my house. The work, shown as digital projections with synched audio, was surprisingly fresh, but slightly different what I remembered (I believe there is more than one configuration). For me it felt like looking at an old family album, with faces and songs from a time that I did not really live as an adult, but that I understood, in part because of this work. Because of its groupings, the walking in and out of its room by the audience was intense, specially during the naked male part, but a few of us stayed for the entire duration, enjoying the darkness and coolness and emptyness, that felt like an oasis in the crowded urban Brazilian summer weather. 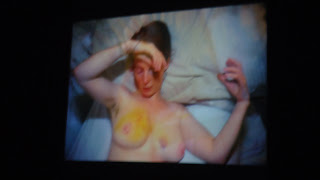 Now, some well-known, but never-met, artists.


Douglas Gordon (Scotland, 1966)'s Pretty Much Every Film and Video Work From About 1992 Until Now To Be Seen on Monitors, Some with Headphones, Others Run Silently, and all Simultaneously, a beautiful installation that incorporated some local elements (such as Brazilian crates, which are different from American ones). 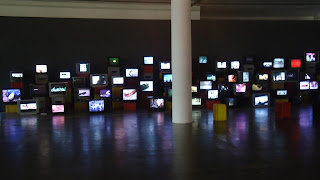 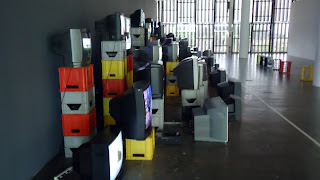 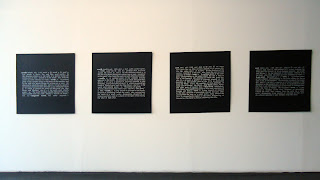 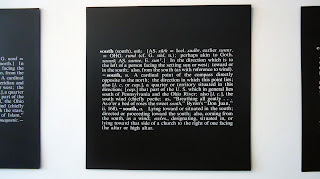 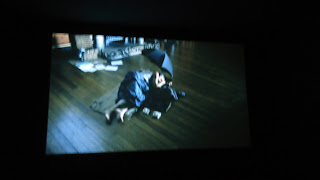 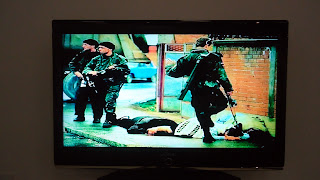 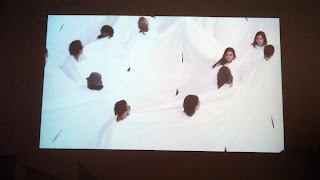 Chantal Akerman (Belgium, 1950)'s multi-room video installation D'est (From the East), which is pretty engaging, even when seen backwards, as I did on my first go (three rooms, two entries). I think, not sure. There are two youtube embeds given my taping fiasco, but I believe that a) they are one piece, and b) should be seen in the order below. Maybe.

Alfredo Jaar (Chile, 1956)'s The Eyes of Gutete Emerita reminded me of the slide library at work, the one in graduate school, and the monumentality of a technology so quickly surpassed. The Bodily presence of this piece, given the repetition and scale, also reminded me of all bodies that have gone missing, buried in unmarked graves, every where in the world, throughout history. And for some reason I did not steal one. 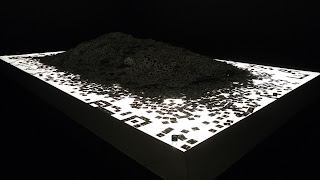 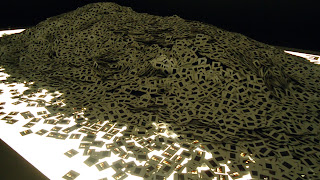 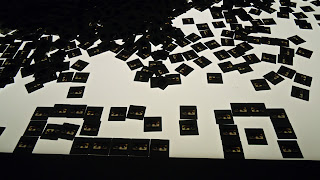 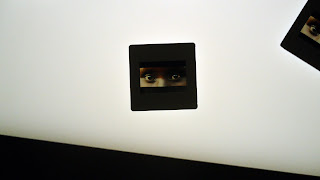 And now some of the works that persisted in my memory (and that will not be featured in future blog posts). 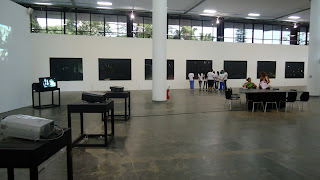 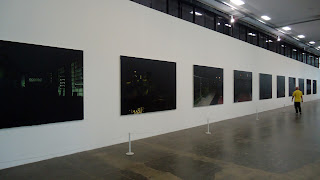 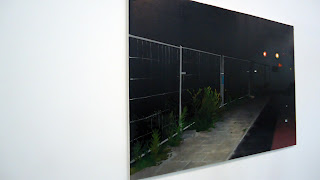 Pedro Barateiro (Portugal, 1979)'s Plateia (Audience). Pieces like this makes one understand the reason why the budget was so high for this edition of the Biennial, though I believe this was made in situ, and not shipped. 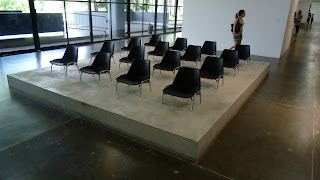 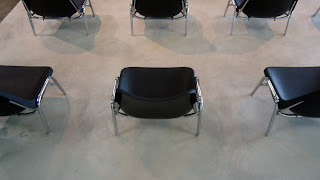 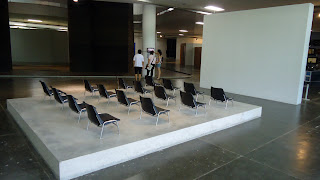 Wilfredo Prieto (Cuba, 1978)'s stunning installation on the flag colunnade, of grisaille flags, outside the Pavillion titled Apolítico (Apolitical). Here shown as seen from interior and exterior of building. 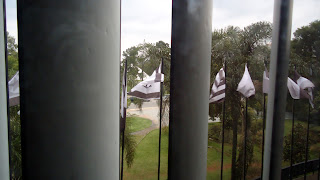 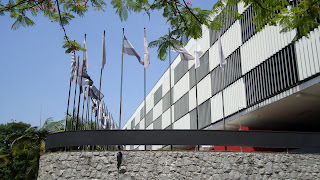 Kimathi Donkor (England, 1965)'s oil painting series titled Scenes from the Life of Njinga Mbandi, which seemed small in scale and somewhat rarefied in an environment filled with video and installation, though they had a beautiful luminosity to them. 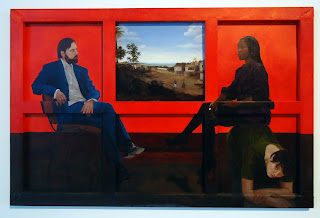 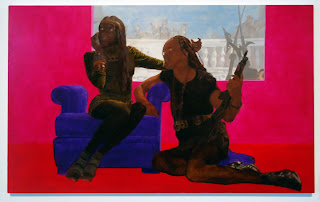 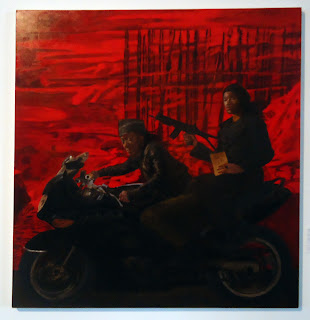 At this point it seems to me that it will be best to break this post into two parts, as I still have over 10 artists to go through. While my selection may seem extensive, given the number of artists and the quality of the work, I am not surprise. But keep in mind there were quite a few unremarkable presences there. And that two other posts about the Biennial (one exclusively about it, and another partially) are still forthcoming. So I'll end with the beautiful painting above.
Posted by Unknown at 11:34 AM