(re)claiming an identity - some considerations

As much as I roll my eyes (sometimes at myself) when someone brings up Facebook-related topics for face-to-face conversations, I have to be honest and say that many an exchange there have inspired me. This entry is one of those.


Earlier today an artist friend posted on her so-called Wall a link to an article that had been published (in a few places) about Detroit artists. The genesis for this blog came from my the constant hearing about the need (what almost everyone in the local art scene seemed to express as a need) for more critical expressions and reviews of local art. Early on I thought that my (self-assigned) job was to pose the hard questions and speak openly about what everybody else seems to be talking about when no one is looking.
While now I do not see this as any sort of mission or quest, nor that I am the best person for it, I find myself wanting to, once again, to make public what so many of us think. So as a response to the link posted, I commented:

"do you think there will ever be an article about Detroit artists that make work about other stuff besides the city?"
Similar to this blog, I actually never expected an answer to come up, because sometimes what we need is to think about stuff and not resolve them.  For the following two hours since I commented, I tried to think of actual solutions to this issue.
But first let me just say that I do not think there is anything wrong with making work about the place where you live, and/or about Detroit. The usual suspects, we all know who they are (add Slow's BBQ just in case), are actually extremely interesting and talented artists, who actually work real hard and really well at what they do. So my take was not meant to critique these artists, but in fact consider the circumstances that perpetuate this discourse about the local art scene, and to an extent, the city itself.
After a couple "likes" on the post, the first two from artists who do not directly make work about the city, I began shuffling through my mind all the local artists that I knew, their work, their subjects, attempting to make some sort of inventory. I tried to find some relations, by first considering some figurative painters. But then a bunch of expressionists ones came to the fore. I then thought about organizing exhibitions to display the best of the best, in the hopes that, if these happened more often, eventually someone would take notice (though there are already and there have been many excellent shows). But would that really be it? Would that work? It seemed that I could not come up with an answer to my own question.
Eventually I got a response to my comment. My Facebook friend (who originally posted the link), and here I am paraphrasing her, responded that we all to some extent benefited from this, and that hopefully one day the powers that be, who have chosen the few, might remove their blinders, look around a bit more and see what else is around. And that actually pointed to the real crux of the problem.
If an art exhibition was mounted in a gallery, but no one saw it, did it really happen? And how one chooses which gallery to go to, which forest to wonder through? Do people write about a few artists because these artists are good, or are they good because they are written about?
We seem to live in a culture, more and more globalized, where the need to categorize things is a given, not a necessity. Because there is so much to encounter, some sort of discernment must take place. This of course is the full realization (though I suspect with different results) of that modern need to put things into a box - or rectangle. The difference is that we have so many frames that at times they seem to disappear.
This situation goes along with what I am talking about. It reminds me of the 70s and 80s identity politics in arts, which at one point was the norm, but seem to have fallen out of fashion these days. In the process of claiming a stake at a notoriously exclusive realm, artists also carved their coffins; consider the hyphenation that we see everywhere, the gender/race/ethnicity thematics still prevalent. And the eye rolls that follow. While class and age have not necessarily been incorporated into the game in a prominent manner (rarely do we see exhibitions of "elderly" work in the mainstream, though queerness as an example still shows up), this classification now includes geography. We read everywhere that someone is "..."- based. I myself have in my bio "Detroit Metro-based artist," and have benefited from opportunities for the minorities I identify with. But am I a Detroit artist? (a similar question was raised by another Facebook friend in regards to my question).
Perhaps this constant repetition of the same names has become a means to forge a Detroit identity; anyone that veers from that identity complicates its premise. My issue with this reminds me of the issues I had with the old identity politics. This need to call for  identity is very reductive -  I believe us to be a cluster of varieties, and not a single measure. The same goes for the Detroit art scene. As someone who constantly gets pegged as an artist working with identity (because I am a person of color and use myself in my work), even though that is not the case as far as my intentions, my ultimate realization goes back to the interlocutor, and not my self. We become what others make of us (though ideally we'd be what we choose to call ourselves).

Whether we like it or not. This need for putting a label on something, rather colonial still in 2011, brings forth the inadequacies of the speaker - and their comfort zone. However conscious or not, many have been trained to look at and not look into. Hence the impression that the same narrative keeps being retold; it is so prevalent, it must be true.
But who is to blame? Again I do not have the perfect answer, but I think that we are all to blame to some extent. A year and a few months after this blog started, the number of voices writing about Detroit art critically has increased in a minimal manner. Again, I am not even sure if this blog does that either. There are many blogs (if you post and no one reads, did it really happen?), reviews, discussions, and even more interesting conversations, but if we do not figure out a way to enter a greater dialogue, we will remain the same malcontent group, talking about the same things, and in the process, forge a secondary Detroit identity that goes nowhere. How do we avoid that? I imagine there are many ways to go about. One thing I have noticed is that very few of my Facebook friends ever share or repost my blog entries on their Walls (talk about hitting the wrong wall), thus limiting the scope of this discussion to my few followers. They all seem to repost all those Detroit articles we all seem to be reading about, all the time. I do that myself, guilty as charged (of both reposting those articles and not always sharing local writing - perhaps I am following the only examples around).
I am ware that maybe what I write is lacking, inconsequent; maybe I am not yet a Detroit artist (nevermind a writer). Maybe this is not a community that supports one another so openly, because competition is a reality. Maybe we are but a cluster of individuals that seem to gravitate around something greater than us all, with no destination in sight. Everyone is try to go for the proverbial carrot on the stick. Maybe we also need to remove our blinders.
I'll continue to write, for as long as it becomes a learning experience for me, a place to understand and productively move forwaed. I'll continue to write, in the hopes that someone, somewhere, will walk into my forest, that someone will take notice, and nod. And then everyone will know it, everyone will know that what I saw really happened. 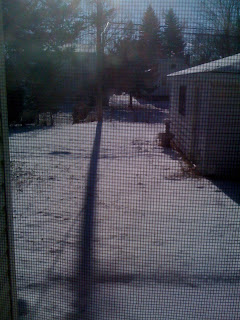 looking south, toward Detroit
Posted by Unknown at 1:52 PM