[this article was originally written for The Oakland Press, February 23, 2011. Because of editorial differences - they wanted to split it into two, I did not, and so forth, it was never published. I decided to make some minor content reviews, mostly around its timeframe, and post it now.]
My parents have a habit I imagine is quite common. When faced with a photograph of unfamiliar nature (or one from a time they are starting to forget), they tend to name, out loud, the things and people they see in it. This is especially evident when the photograph, in parts or in its totally, is out of focus. “That looks like a rock, but maybe it is a mountain,” or “I don’t remember that day, but I remember that hairdo and sweater,” or “who’s that?” or “are you sure that is Uncle (…)?” For some reason I correlate this to when I am on a road trip and feel the need to say, out loud, what the billboards “say.”
Once I found myself at a cocktail party at the Metropolitan Museum of Art (MET) in New York City. Aside from its iconicity - the MET has probably been pictured and featured in hundreds, if not thousands, of movies and televisions programs worldwide - this museum holds to me that persistent moving image of someone arriving in a limo and going up the front steps in fancy dress. Though I got out of a yellow cab (another NYC icon), and did not wear exactly a suit, the interior experience also matched what I had seen on the screen. That was obviously not my first visit to the MET, but it was the first time I went there at night, and drank cocktails from an open bar. The reception I was invited to took place in the main lobby and, through a heavily guarded and velvet-roped set of pathways, at the Temple of Dendur in the Egyptian Art department. To imagine the scale of this museum, picture a supersized DIA. I often refer to that particular display as the “pyramid inside the museum,” though of course it is neither a pyramid, nor there is one (full scale) inside the museum. The setting for that temple, a fragment from a larger structure that was given to the US in the 60s, is quite breathtaking (in my view one of the most beautiful museum interiors in North America), especially that night, with dramatic lighting, candles set low by the water, and hundreds of people wearing black. 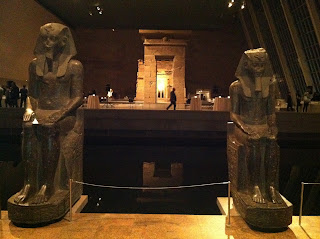 As I sipped my Pinot Grigio and scanned the crowd for familiar faces, I could not but think of another party at a museum I found myself in, a week before then: the opening reception for the LifeStories and Miracle and Jokes, Circle Disk Rotation and 22 Lost Signs of the Zodiac exhibitions at the Museum of Contemporary Art Detroit (MOCAD). The crowd there was decidedly younger and more colorful, both in attire and appearance. The mood was way more festive and inclusive, perhaps due to the affordable drinks at the cash bar and the music line-up for the evening. I smiled wondering what the reaction at the MET would be if I began dancing as I did at MOCAD, when DJ Spooky was spinning.
Traditional Art museums, such as the MET (and the DIA for that matter), have a particular mission and format they follow. Museums are generally know as repositories of knowledge and artifact, with exhibitions open for the public at large. Museums have their focus on a particular discipline and/or revolve around a particular theme or collection (a Natural History museum, versus a Hall of Fame for example); an Art museum usually collects and displays art, artifacts, art objects and/or objet d’art (and Art). Many museums began as private collections (think of a curio cabinet, again supersized) from wealthy patrons that, because of an increasing number and/or lack of space, ended up building stand-alone structures to house their beloved possessions – a situation that occurs even today (Miami is known for such family holdings in the U.S. but I bet they exist in every major city in the world). Eventually many of these collections get donated, combined or added to public or semi-public institution, a old practice that still happens today (if you read the labels beside an art work, its provenance might be attributed to a family or a private archive).
What sets MOCAD apart from this traditional understanding of museum is the fact that MOCAD does not have a permanent, or even semi-permanent, collection. Much of it is due to the young age of this institution, its current facility (an old, retrofitted car dealership on Woodward Avenue, south of the DIA), as well as its mission and commitment with the “now.” But there are other areas in which MOCAD stands out from the rest (at least around here). This is not common but present in museums world-wide, usually at their infancy (the MCA in Chicago did not begin acquiring a permanent collection until the 1980s). Another somewhat similarly atypical museum in this region is the Cranbrook Art Museum in Bloomfield Hills. Cranbrook has a collection of its own, but its focus is deeply rooted in its Academy, programs and community, which altogether engenders a particular vibe to the place (Cranbrook could be seen as an analogue to the School of The Art Institute of Chicago+The Art Institute of Chicago, but Cranbrook’s extensive educational community component sets it apart from any categorization). We have commercial art galleries, such as The Butcher’s Daughter Gallery  and lemberg Gallery in Ferndale, that operate almost as a museum, with curatorial, thematic exhibitions (as opposed to exclusively artist-proposed ones) and salon/presentation discussion events. We also have patrons whose extensive Art collection are managed by full time curators. The blurring of traditional lines also cut across our regional University Art galleries, Art Centers, non-profit organizations, alternative spaces, and so forth.
Back to MOCAD, I imagine that in the past, before 2006, the many conversations around town on the need for a contemporary art museum sought the creation of a mini contemporary DIA. I also suspect that its off-the-beaten-path stance has become a choice and source of identity, perhaps forged under its circumstances. Since MOCAD’s opening I have been to a variety of events there (performances, screenings, discussion panels, fundraisers, receptions, private parties, masquerade balls, etc), and have encountered many others by chance (poetry reading, children and family afternoons, and even a green/organic/sustainable food presentation). The physical space of the museum has also gone through many configurations, but it seems that the current set up, with an arch of large exhibition rooms surrounding a central, multipurpose core, will remain – for now.
It was at this central room where I danced to DJ Spooky (né Paul D. Miller), who himself defies categorization. I first encountered him in a record store while in graduate school (back then I collected CDs instead of art); a few years later I saw him present at a national arts conference in a panel on the relationship of Art and Sound. A couple years ago Spooky performed and lectured at the DIA (Rebirth of a Nation, a visual and auditory reworking of the historical and ever controversial 1915 movie of similar name), and signed copies of Sound Unbound, the anthology book he edited. And later again (a recent past that is now a somewhat distance past) I re-encountered his music in that central museum room, taking me 12 plus years back, where many of Detroit metro communities wonderfully collided: the art types, the music types, the students, the socialites who let their hair down, the gays, the nerds, the punks, the scenesters, the old, the young, the wannabees and the has-beens. As a gathering place of the diversity of our region, MOCAD really operates as a community or cultural center. At this edge of somewhat conflicting positions (elitist Art or inclusive of everyone), I find myself in an uncomfortable but inspiring mental space: what is a museum supposed to be? 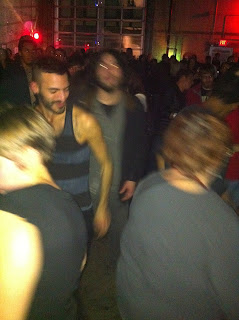 But Vagner, you may ask, how about the Museum of New Art (MONA) in Pontiac? Hasn’t that non-collecting institution, which carries the word “museum” in its name, served as a community center, based around contemporary art, inclusive of many forms of expression, for quite some time now? So here lies the difficulties of holding on to old definitions and traditional perceptions of things, because everything seems to be in constant shift. Lines are constantly being crossed and blurred – which is very analogue to our current economic situation and the many reconfigurations our communities and industries will have to undergo in the years to come. The Detroit metro art scene, however confusing in my view, is also very intimate, and in my personal experience, very welcoming, even nurturing. It is complicated to speak of institutions in such a public manner, as this blog is, because along with institutions come the individuals behind them – and that line, and the line of criticism, of what or who is being critiqued, is also difficult to discern. I have personal and professional connections to some extent with all the aforementioned Art places. What is wonderful about MONA is also what in my view holds it back. MONA has the paradoxical position of always being on the fringes, and as such, it enables generations of artists and experimenters to articulate their expressions, which is what this region, actually any region, needs. MONA becomes in a sense a stepping-stone for bigger things to come, a place and space to work through ideas and possibilities. But unlike MOCAD, MONA has not been able to retain its performance and visibility in the public eye. While there are many reasons for that, and as many theories, rumors, speculations and stories, one remaining factor is economical (it is funny how the economy really cuts through every layer of society). Another difference between MONA and MOCAD has to do with latter’s goal of being at a center (geographically at least, even if MONA now was a space at the Russell Industrial, its location is still tangential).
The line I just mentioned, as far as being crossed by me in view of criticism, is also a line that is blurred. Perhaps the apple does not fall too far away from the tree. Like my parents, I like to figure out what I see before me. Much like an out of focus photograph, deconstructing its components is a good place to start, but not the definite and only possible way of interpreting it. The same way one photograph may mean different things at different times (picture a photo of a loved one that is no longer around), the same could be said of these institutions that aim at both preserving and presenting expressions of a time. Writing about it parallels reading aloud billboards on the road – writing becomes a way of finding a ground from which to stand, a strategy for situating oneself and one’s thoughts. Perhaps the way to think about all this is that right now everything is up for grabs. New understandings of old standards are actually the norm. As such, we can think that there is room for everyone, and even more room for more to join in. There are some rules to be broken but many more to be (re)written. Maybe I will dance at the MET next time I am there.
Posted by Unknown at 11:27 AM