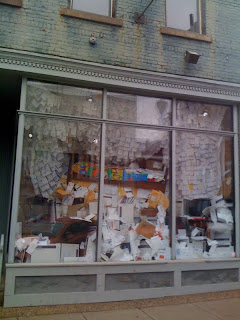 last friday, on my way home from work, I stopped by MONA (Museum of New Art in Pontiac, MI) to take a look at the exhibition Breeding Ground: New Detroit Sculpture, co-curated by Kevin Beasley and Christopher Samuels, which featured the works of Nathan Morgan, Abigail Newbold, Andrew Thompson, and the Detroit Projection Project (as well as the curators'), dispersed in four galleries and two floors, all delineated and labeled in a convenient map.

due to a scheduling conflict, I was unable to come to the opening reception, which greatly diminished my experience of the pieces displayed - the scale and interaction with the human body (other than mine, and that of multiple bodies) could potentially and significantly have affected my responses, as well as seeing the works at night (as opposed to 2 in the afternoon).

in preparation to the panel discussion to take place on November 01 at 4 pm, the gallery that features the works by Nathan Morgan was modified from its original arrangement. I am aware that my reading of his art may not have been 100% aligned with his intended choice, so I elected not to write about it (though what I perceived seemed interesting). the brevity of my visit also did not allow me to fully experience the two video works by the Detroit Projection Projects (aka Steve Coy and Brandon Wally), so I will not write about these works either. for the purpose of this blog I thought this would be the best option - I am certain more opportunities to look at their works will arise in a near future.

there were a few words floating in my head as I looked at the works presented. they, in one way or another, could be applied to all works seen, in both positive and negative aspects. 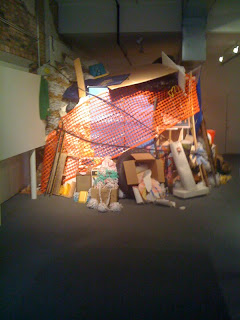 on the first floor, in the Front Window gallery I encountered the works by Andrew Thompson. I have seen and enjoyed some of his works in other exhibitions, but did not notice a particular correlation to what I have seen him produce before to these, with the exception that a personal narrative seems to lie somewhere between the artist's mind and the title of the piece(s). Constituted of refuse and recyclable materials, an inference to the human body (via humanoid shapes, silhouettes and house/dwelling) was made throughout the space. while I can see that these work relate to the vague exhibition description found online (Detroit as a scavenger's paradise), I do not particularly understand why and how this garbage/recycling aesthetic has to do ONLY with Detroit, but with any urban setting - I am also not sure how the word "new" applies here, as works like this have been made for a long time, every where, in both high and low art. While laborious and obsessive in appearance, process and scale, and with beautiful but very minute sections (the weaving of plastic grocery bags come to mind) the pieces overall seemed facile to me, slightly obvious, and not transformative enough from its original source materials - nor did it transcend enough (or at all) its current museum setting - too much of a good thing sometimes is just too much. perhaps an outdoor installation would have shed a more interesting light onto these. I also wonder where these materials will go to once the work is deinstalled - I fear that it might end up where it came from, and to some extent potentially reinforce or contribute to what is being critiqued (this last thought could be applied to the exhibition as a whole actually). 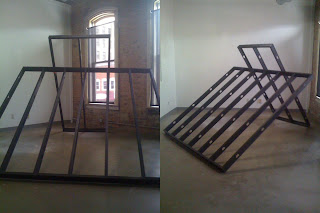 moving along upstairs I first visited the North gallery where the works of Christopher Samuels and Kevin Beasley were installed. Samuels' use of prefabricated materials and construction tools provided an elegant solution at times. the image above depicts in two views by far my favorite piece of his, which led me to believe (in retrospect) that here what had occurred is what lacked in other parts of the exhibition. this untitled piece transported me outside Detroit, outside Pontiac, outside MONA, and even outside my own physicality - I concentrated on the fragility of the form in front of me, and the implied tension and descension. the fact that it was installed in the most neutral section of the museum aided my experience. the other sculptures by Samuels , displayed in other two alcove, were not as successful to me. the thought that came to mind was that the work seemed mostly "staged", rather than installed (the word facile again resurfacing). for me that was not satisfying. titles (or at least numbers) and a statement would endow focus to these. the poetics of his pieces were also diluted and lost to me given their proximity to one another - it could be interesting if each artist had work in all four galleries and therefore dialogue with one another. 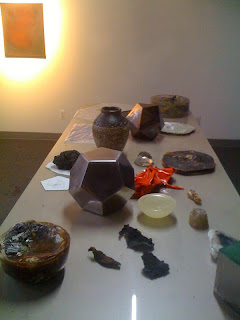 adjacent to Samuels' were Kevin Beasley's works, which to me appeared to center mostly on the congealing of found materials in mutable substances, as well as what I assume to be found objects, with the repeating of round shapes somewhat prevalent. while transformation here was a more evident concern than in Samuels', the transcendence again lacked. his recent solo exhibition at the org.contemporary gallery allowed me to experience Beasley's work under a much more appropriate light (pun intended), his vision there clearer and simpler but more poignant than here, and the beauty of his simplicity seemed more intentional then as well. While navigating through the space here I had a hard time understanding what was purposeful and what was accidental/already there (the North gallery is not spare on industrial fixtures that have a similar texture and feel to Beasley's art), but not in an intriguing or complex manner but rather distracting and dissatisfying (as if I had taken a bite on a piece of fruit and tasted texture but not flavor). it could be interesting that, in their goal of articulating Detroit, these artists could have reconfigured/neutralized the MONA spaces more by remodeling them (even wall paint and carpet removal) prior to installing their work - a makeover practice that Detroit itself needs more, from a grass-roots and proactive position (as a history - of peoples, objects, towns, etc - can be displayed as an interpretation, rather than as an index). I would be curious to see Beasley's work at the Cave, or similar setting. 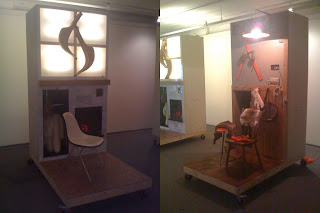 last but not least I moved over to the South gallery (the main MONA space) to the works by Abigail Newbold. While the facile aspect of other works in this exhibition veered towards the random, here I found an ease of entry/encountering that was truly joyful. Newbold transformed the materials she utilized (a combination of found knickknacks and mass-produced furnishings with home-improvement store supplies) into large but portable platform environments that were both funny, intimate, familiar and somewhat forlorn. her pieces also transported me away from the (literal and metaphorical) surrounding noise of the gallery, and had the potential of physically me transport me outside the gallery too, because they rest on industrial-sized casters (I imagine that any attempts of moving these in their entirety might aide in their own demise, since they were assembled in loco and potentially too large to fit into its elevators, a concept in and of itself extremely pertinent to this geography). their titles also imply a distant location (with a hint of resort getaway or homemade simulacra to boot). while they reminded me of Australian artist Adam Norton's work quite a lot (and many others who work in a futuristic modular-home approach), I was able to push those thoughts aside immediately and really see their poetic possibilities. in my view these pieces complexly spoke about Detroit, about living in Detroit, about being and thinking Detroit (and/or what I imagine all of these to be to many other individuals) - of an uncertain fear and dignified grace, with a dash of kitsch and sass amidst its post-industrial dissolution and blurred boundaries; that desire to simultaneous leave and set roots (here and somewhere else). these qualities would position this work to exist and interact with a local social perception elsewhere, not just here, and speak to the transient nature of a globalized but interconnected society, and its citizens.

my reading and experiencing of the art might have been somewhat different if the facilities of MONA were also further neutralized (sans carpet, stains and inconsistent wall color and surface, etc). I hope their new annex gallery at the Russell will solve some of these issues of space/environmental interference on works of art and continue giving the opportunities for the new generations of artists to best display their works, because MONA is one of (if not the most) interesting alternative spaces in the metro area.

I only wish I had been able to attend the opening reception and conversed with the artists to get a better understanding of their work. ditto in regards to the panel discussion (my sincere apologies). I also wish that the texts provided online were better articulated, not filled with vague generalizations about sculpture and Detroit (as well as statements by each artist, which I did not find, this of course could be my mistake). the somewhat repetitive statement of placing their art practice as unique (have we not moved past the avant-garde quest?) and socially engaging (what constitutes a "social landscape" anyway and why is that exclusive to here?) without ever defining what those terms t actually mean or meant within this curatorial program, lacked a much-needed substance that could broaden what their practice can/could be and become. as is, the ephemerality of some pieces might veer into non-existence and oblivion, rather than transcendence.

what may make the works in Breeding Ground relevant to our times is not their connection to Detroit or urbanity or their sculptural statement/manifesto... but what happens with these works once they leave this gallery space.