while I am working on a couple other pieces for the blog, I thought it would be interesting to have a "guest-blogger" filling in. 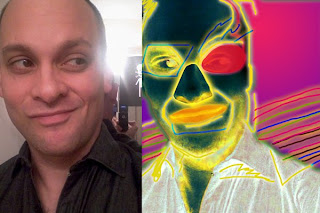 I hearby introduce you to the one and only Sean Capone, an artist extraordinaire, designer par excellence and opinionated big apple dweller.... below is his review of a current exhibition at the Guggenheim Museum in New York City, originally posted on January 30, 2010 on Facebook:

Speed Dating at a Strip Club: THIS PROGRESS by Tino Sehgal

The famous riddle goes something like: "What crawls in the morning, walks on two legs during the day, and three legs in the evening?" The answer has something to do with Tino Sehgal's latest installation-slash- performance-slash- social sculpture now at the Guggenheim Museum. There is no physical artwork in the main rotunda; on my visit, the museum was amok with children, groups of teenagers, and bemused folk of all ages. The atmosphere was lively. The experience of the piece goes something like this: at the base of the ramp, a small child confronts you with the question "What is Progress?" As you walk and talk and formulate a response to this precocious charge, you are unceremoniously fobbed off on a person of more advanced years--late teens, early 20s. More walking, more talking, another handoff, another age bracket. Before you know it you are at the top of the museum, shaking hands goodbye with the senior-aged 'guide', and then you go into a side gallery and look at some Picassos and stuff. So the question about progress really becomes a question about process, about the inevitability of aging and decay, and any grand notions turn inward and become soberingly personal.

Back up a minute. The first thing you see upon entering is a couple embracing,making out, and rolling around on the ground floor of the rotunda. Their movements are dancer-ly and mannered, like a tango in slow motion. The awkwardness of witnessing public eroticism dissolves over time, partly because the stamina of the performers and extended duration of the performance, but also because they are constantly visible no matter where you are--it's an erotic ballet which anchors the center of the Guggenheim's helix runway. They are the first and the last thing you see: as I left (after an hour & a half or so) a changeover took place, presumably to give the first couple relief. It's worth mentioning that the couples were male-female, young, hip-looking, inter-racial, fit, and basically attractive.

Ok. The kids are totally adorable. Their earnestness and obvious thrill at being in charge is disarming and a cunning point of entry to the piece. I found myself talking to them as I would speak to an adult. Good one.

As you 'progress', the transitions from conversation to conversation can be abrupt. The guides are prone to leaping out from behind columns at you, or darting away when you are in the middle of a sentence. This is meant to keep you off balance, to remind you that you are on the clock. The first time I went through the cycle, it was kind of exhilarating. I stood at the top of the rotunda and looked down at the kissy dancers. I thought about all the cool things I just said in a short space of time. Then you see the guides walking up the ramp chatting with someone else, and you feel a little cheated. These people are there because it's their job to pay attention to you. They do not particularly find you interesting. It comes off feeling like speed dating at a strip club.

Not that there's anything wrong with strip clubs. We seek out fake experiences all the time, as a reminder of our notions of the so-called 'Real.' You watch strippers to get a certain experience about sexual voyeurism. Speed dating gives you a pared-down, goal-oriented meta-experience of flirtation. But there's no essential chemistry, and the conviviality is self-aware. Sehgal's 'Progress' is not about social chemistry. The final conversations, prompted by the older guides, were a little morbid. I rambled on about capitalism, war, and death. The particular architecture of the Guggenheim is perfectly suited to house this stagy cradle-to-grave metaphor.

The second time I walked through, I felt a rebellious urge to break the rules a little bit. This piece DOES have rules. A child reprimanded me for turning the question back on him (the performers are not allowed to give their own opinions). I stalked a couple of other people's 'conversations', and the vibe was about the same as when one does this to strangers at a bar. I got one of the older guides to break the wall and admit that she didn't know if this was art, and that "no social science will result from all this--the artist will never know what happened". An enthusiastic young German guy told me that "art is supposed to confront you with thoughts." I flirted with a couple people (unsuccessfully). I tried to get a guide to walk me DOWN the ramp (nope). I deliberately answered questions obstinately and got what felt like an honest argument out of the performer, but I never got a sense of any REAL tension, or that the guide was allowed to judge my opinions as one would in a real conversation.

And, just in case you think this is all a bunch of phony baloney, or if you need a break, there IS art to look at. The side galleries are stuffed with the procession of Modernism: Picasso, Braque, Kandinsky, and Brancusi, all that pre-war jazz. It's good. It makes you think about art's relation to the 'progress' of the 20th century. There is an amazing NEW work by Anish Kapoor that looks like a rusted beached submarine forcibly wedged in a narrow gallery. It's volume and heft is breathtaking; in fact the piece is so large you have to view it from three separate corridors, and for once you get to peer into the void of the sculpture's interior. It's a great experiential magic trick, and it was all I could do NOT to shout just to hear the sublime echo. I prefer the volume of the void to his mirror surfaces any day.

As I left, passing the dancers engaged in their amorous torpor, I witnessed a a changing of shifts. Another couple (also male-female, young, and interracial) merged onto the floor. After a minute of synchronized dance-hugging, the first couple exited, to some scattered applause. I think they deserve a lot of credit for their strenuous, compelling performance. But if it were my piece, I would have taken a lot of couples, really going at it, and hidden them behind stairwells, around columns, in the reading room, and other secret places. There is no sex without a little mystery, a little surprise--even in a sex club. And there's no come-hither, no real allure, in a conversation that one doesn't really want to be stuck in. Am I really talking to someone, or just waiting for my turn to speak?

'Progress' is part relational aesthetics, part social work, and part Tony & Tina's Wedding. In other words, it limns the boundaries of the comfortable territories of ART and is part of a genus of activity that perhaps needs a new name to describe itself. For all the valid criticism that gets lobbed at the Gugg, this is one show, love it or hate it, that WORKS in it, and BECAUSE of it. The open spiral ramp shows you simultaneously where you came from and where you're going, the people that you're traveling with, and the painful human yearning for connection and love which slowly spins at the axis. This sounds like as good a definition of progress as I've ever heard.

click here to visit the Guggenheim
Posted by Unknown at 2:48 PM