A new direction for this blog that I aim to pursue is what I am calling "e-terviews", or interviews conducted via email exchanges with artists pursuing new or alternative art practices. This first one features the artist Leon Johnson, whom I curated into an exhibition in March 2009 at the Oakland University Art Gallery titled Contemporary Flânerie: Reconfiguring Cities. We presented his video FAUST/FAUSTUS in Deptford, the culmination of a decade-long exploration that poetically merged disparate narratives on life and/as pilgrimage. 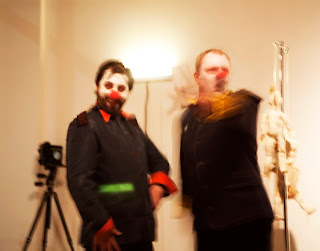 Leon Johnson is an artist of many media (video, performance, print press, theater installation, and painting come to mind), working on projects that combine research and multilateral practices that are simultaneously intriguing, disturbing, and beautiful. Originally from South Africa, Leon has shown throughout North America and Europe. In addition to keeping an intense exhibition schedule, Leon is also an Associate Professor of Intermedia, at the University of Maine, and faculty at Transart Institute, Berlin. In the Fall 2010 Leon Johnson will be moving to Detroit to chair the Fine Arts Department at the College for Creative Studies.

1. For the ones unfamiliar with the large oeuvre of your work, could you please delineate a general sense of the strategies and conceptual underpinnings/concerns for your art?

I feel a need to keep at arms-length the supposed historical or contemporary demands on creative practice, and rather commit to inclusive, very porous strategies - the intertwining of trends, debates, and practices in popular culture, the humanities, sciences, politics, and the worlds of commerce and communications. A favorite proposal around this idea comes from Homi Bhabha, looking at creative engagement where the power is "not in its transcendent reach but in its translational capacity: in the possibility of moving between media, materials, and genres, each time both marking and remaking the material borders of difference." 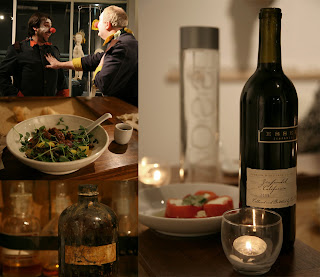 This translational potential just feels like a healthy way to proceed. It is particularly useful in subverting my occasional impulse to settle for creative mimicry, or pastiche. Or at least to be as conscious as possible of all the skeletons that collectively rattle in our maze of closets, every time we settle for those “place-holder” solutions. One such project is DUAL SITE: A Psycho-Geographic Dinner Theater. DUAL SITE is a collaboration that mobilizes the works of artists, urban growers, gleaners, farmers, wine makers, bakers and chefs, metal-smiths, artisans, chefs, designers, youth groups, actors and food producers from diverse backgrounds into a robust company of inventors, really. The project is one part dinner theater, one part economic catalyst, and one part community building, with its goal to be a new model for cultural production both within and beyond the traditional bounds of the arts. DUAL SITE takes inspiration from the book Defiant Gardens: Making Gardens In Wartime, written by New York native Kenneth Helphand. This important survey of wartime gardens speaks to the power of human and ecological resilience to cultivate communities through collective making. “Defiant Gardens suggests that planting, cultivating, contemplating in the garden, planning for life, for beauty, for order, is war’s opposite and thereby not just escape but a potent act of resistance”.

The performance features actors in acts of reclamation and recollection: Paris, 1850, excerpts from the Journals of the Goncourt Brothers – Russia, 1929, two men seek answers in a doll store, just under the heel of Stalinist annihilation, adapted from a short play by A.A. Amal’rik – Warsaw, 1944, the last two gardeners, in the last Jewish garden in the Ghetto. Each night, between sequences, a three-course dinner is served to the members of the audience in custom produced porcelain bowls from our nomadic kitchen.

2. Collaboration, which is regaining more prominence/visibility in recent times, plays an important role in your practice. Could you please expand on your interest in it, or the/a catalyst moment that pointed your practice towards collaboration? 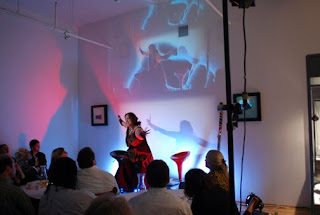 Well, I think the real question is how does collaboration develop new forms of community and practice, no? And how they are accompanied by new vocabularies and methodologies. How do we develop collaborative communities across groups that have seemingly nothing in common? That, to me, is critical. My current models are always seeking to situate collaborations around conviviality and food – in history, in memory, in contemporary ecologies - so simply put, convivial engagement is my preferred modus operandi. Yes, hermetic research and contemplation is needed, but the power, and thrill, of a vibrant, diverse dinner-table can rarely be topped as a space of potential.

And, as a model for collaborative engagement I keep on returning to that convivial-vortex - inspired at an early age, perhaps 14, by Allan Kaprow and by the work of Fluxus, and its founding agitators Alison Knowles, Geoff Hendricks, Emmett Williams, George Brecht, Robert Filliou, George Maciunas, Yoko Ono and others. And our kitchen table at home as a child, made very active, very political, and very pleasurable by my Mother.

3. The employment of multiple layers of meaning (borrowed from literature, cinema, history, etc) and manifestations in your work (video, site-specific performance, librettos) seems to be a reoccurring thread. How to did you arrive at such methodology?


We need new vocabularies, and expanding strategies for reclamation, excavation, recovery, and rapprochement. A worthy problem demands worthy research to engender outcomes worth celebrating. [Of course “worth” is a shifting value-system, but one we must negotiate in context. Over, and over again.] This process must challenge us to negotiate the next set of emerging problems. 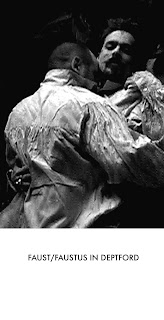 A project that exemplifies this is the 15 minute video I produced in 2003, FAUST FAUSTUS IN DEPTFORD, after a decade of development as a monologue, a duet, then a performance with a company of 12, including, eventually, composers, glass artists, silver and goldsmiths, singers – touring the UK in six English Heritage sites – and finally… a 15-miute video! The project interweaves documentation of live performance and psycho-geographical drift, triangulating through remora and remembrance the unmapped distances between the Faust legend, Christopher Marlowe's murder in Deptford in 1593, and Oscar Wilde's vandalized tomb in Paris.

The main current of the travelogue-video begins as Marlowe’s 16thC Faustus and Goethe’s 19thC Faust meet to wander points of location and of loss. Faust and Faustus emerge from under the Thames, drifting from the river to nearby Maryon Park, the exact site where Antonioni filmed the scene of the crime at the center of Blow Up, a scene and site in sympathetic riddle to the journey Faust and Faustus are making. Faust and Faustus then “drift” to Paris, to perform an "intervention" at the site of Oscar Wilde's tomb in Pere LaChaise cemetery, a simple pilgrimage to repair for a silver moment the dismembered Sphinx that hovers atop Wilde's tomb. 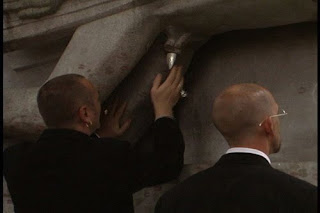 In this act of re-membering, Faust and Faustus pay their last respects, honoring the generative in resistance to scandal and ruin. From Paris, the two are able to make their final trip to Deptford, to visit the site of Marlowe's murder and burial ground, another riddled loss of a poet both decadent and brave, another prophet of "this new world." And from the graveyard they find their way along a blighted urban path in Deptford to the polluted banks of the river Thames, where, in fading light, the travelogue documents a final drift of chance discovery – a rusted message, a final memory of unmappable love, and the appearance in blue twilight of a miserable guide to the next or the last destination.

4. Site is another important aspect for your works. Was the complexity of Detroit as an urban and cultural space a contributing factor on your decision to relocate here? 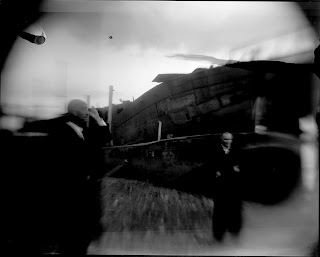 Yes, certainly. The palimpsest that is Detroit is powerfully compelling for me – beyond all the supposed “posts” – post-capitalist, post-American, post-industrial, etc. It is a landscape as rich as any – including the entire length of the Thames River!

My move here follows an enchantment with an ongoing journey that began with embarkation from the southern-most tip of Africa, via San Francisco, New York, Iowa, Oregon, Maine, and onto Detroit. Layers, and layers of reclamation and potential, no?

5. What projects/directions do you foresee exploring here? 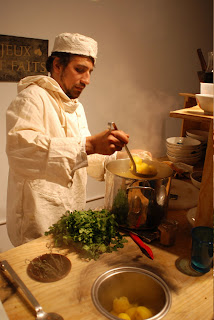 One is working on collaborations with SPURSE in Detroit. SPURSE is a creative consulting service catalyzing issues into actions. Through research, design, making, exhibitions, events, teaching and publication, they engage many scales and systems, and explore the entangled emergent complexities of the human and nonhuman, organic and non-organic. To articulate problems worth having and worlds worth making, our curiosity must ask the question: How are we not merely in the world, but of the world?

It all starts with dinner. Lets begin there, and with dates, locations and times. I do a pretty good Green Thai Curry, and have experience setting up field-kitchens. Can somebody help slip-cast 200 porcelain bowls?

"The world is both our earthly inheritance, and a cultural and ethical horizon. We reach out to it, in the best way we know, when we protect and propagate the right to narrate and the duty to listen. And that social 'relation' - to relate, to narrate, to connect -becomes our juris-diction and our juris –dictio, quite literally, the place from where we speak. No name is yours until you speak it; somebody returns your call and suddenly, the circuit of signs, gestures, and gesticulations is established and you enter the territory of the right to narrate. You are part of a dialogue that may not, at first, be heard or heralded—you may be ignored—but your person-hood, your shared life, your telling, cannot be denied. In another's country that is also your own, your person divides, and in following the forked path you encounter yourself in a double movement... once as stranger, and then as a friend."