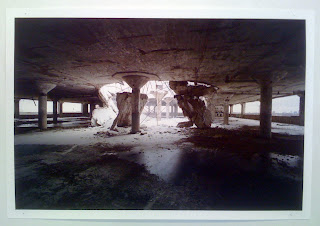 the title for this blog comes from a fortune cookie I got at a restaurant last night. that day had an early, fueled by coffee, with too many activities and few breaks in between. by the time I sat down to eat dinner with a friend we were both pretty spent (his excuse a jet leg)...

lately I've been thinking about my life, how I've gotten here, where I will be going next, et cetera... much like this blog, life begins with a single step, going out on a limb: the first time we open our eyes, or say the first word, kiss someone, leave home, quit that job, click the camera shutter... all a risk. all a roll of the dice. impulsive and instinctual decisions with potentially little regard for outcomes or consequences...

that nagging question, of having regrets (or not) is always looming. but it really is irrelevant. we are responsible for our actions. while we might have done something else if we knew then what we know now, ultimately the decision made is always right. because it is a done deal. because it propels us to be where we are today, right now.

the secret is to love the now.

so today, finally, I went back to the Susanne Hilberry Gallery, a place I had not returned since my last visit and subsequent blog entry. I felt torn between really wanting to see Scott Hocking's exhibition, but not wanting to go there, in case I did not like the work. I was also haunted by my own thoughts, that were expressed in this blog, about practicing and critiquing the art community I belong. 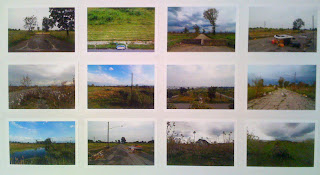 Scott and I met maybe a few years ago, and often run into one another at art events and functions. but we have only talked once, for a long period of time, at a fancy dress party at the Entenmann's (actually he spoke most of the time and I listened, along with others, so it was a group situation, not a dialogue). perhaps my drawn mustache (and the ever flowing drinks I had consumed) allowed me not to be as shy as I usually am with people I do not know, but know about. what impressed me about Scott was his knowledge and passion about this area (and his work). such passion, that for a place, is somewhat foreign to me. not because I do not like this area, but because I am not a person to get attached to places in general I usually get attached to people and things, and mostly attached to things and people and places I hope to experience some time in the near future). I also enjoyed listening to his stories about his explorations, which, quite frankly, I usually find extremely boring (specially if eventual images are to be attached to such stories). but Scott had/has a way with words that keeps you engaged, because they can stand on their own.

I had heard from more than one trusted source that his exhibition was quite wonderful, but was a bit suspicious of people's kindness. as some of us experienced in a recent public lecture in a large local institution - that was almost as large as the artist's ego that spoke there (though the institution is to no fault), sometimes someone's reputation, allure, and past glories supersede their current achievements and lack of charisma (but of course it could be that we can only appreciate such art and artists in a more personal level, or in retrospect). I feared that the same would take place here.

one article I recently read from a link uploaded on Facebook dealt with the subject of artists becoming critics in smaller communities, and the ensuing problems with that, which related to one of my own concerns in writing from/about Detroit and its art scene... the author's recommendation was that one should only write about art that they deemed good or great.

so here we are. I have to honestly say that I think Scott Hocking's exhibition moved me (not to tears, but to that simultaneous raise of one eyebrow and one corner of the mouth, when you are wonderfully and quietly swept off your feet, so to speak). I felt that his images managed to combine an aesthetic rigor with a critical concern that I normally find lacking in much contemporary photography. what i mean by this is that his images could be simply looked at and appreciated for the formal choices they possess, such as composition, quality of light, balance, and visual dialogue within the grids. but thematically and conceptually they relevantly transcended their subject matter. some of his images reminded me of the sCRIPT series by my much missed and beloved mentor Dr. Gordon P. Bleach, whose untimely death took place in 1999. I believe their concern for architecture and space as reliquaries for memories are very much in tune. 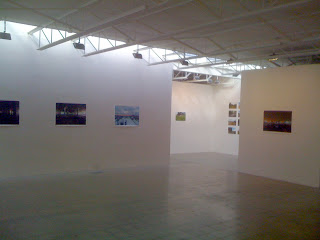 the photographing of dilapidated and decaying structures are usually elementary choices that beginning shutter-bugs undertake (I have been involved with fine art photography in one form or another since 1992, and have seem tons of projects under this category). but Scott's work is far from that, though I am sure he is aware and critical of that too. his manipulations into these spaces, or what I perceived as manipulations, bring forth the placement of our culture in Time (with the big T), as well as that of other cultures in relation to our times (small t). pointedly, like photography, our existence in this planet is as quick as a flash of light, our present glories are our future ruins.

when I looked at Scott's images I felt that they meant to become markers of our time and Time, as if to say, to future generations, that these things, these buildings, these places, once mattered to a lot of us (even as ruins). his works began to function as a reinforcement, a memorial, removed of schmalzy nostalgia, quietly, like a giant that has fallen or is in repose (but not necessarily a mythologized wounded warrior). I felt the excitement I assumed he feels when making his works. I was transported back to that party, when I heard him speaking of frozen basements, illegal hockey practices, and unsuspecting encounters with a stranger's passing, and became inspired by his practice, even if my understanding of it was only from speech (his), not sight (mine). 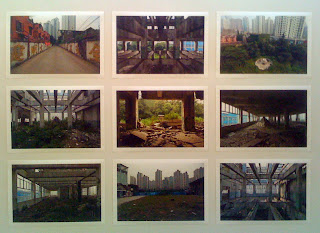 which brings me back to the beginning of this post, a first step of sorts. the last time I was at the Susanne Hilberry Gallery I was trying to find a gift for myself, a replacement for my own birthday party (that never took place), but left empty-handed. and today, which happens to be Scott Hocking's birthday, I have found my own gift.

which image did I choose? if you get invited to my next birthday party you will see it hanging in my house ;-)
Posted by Unknown at 3:30 PM